Entrepreneurs are often described as being highly driven, relentlessly resourceful, focused and unstoppable.  It seems that a lot of entrepreneurs play up this image and talk about how they worked harder then their competitors to get to the top.

Will Smith encapsulated the entrepreneurial spirit perfectly in the following quote:

Determination and drive are clearly important, but how can “ordinary people” cultivate these characteristics in themselves?  How do ordinary folk with a 9-5 job, a family and rent to pay get started on their entrepreneurial journey.  There seems to be a big leap from just being a driven individual to being successful in life.

Well for those of you who are interested, I think I’ve found a hack!

I’ve been thinking more about this recently as my girlfriend has just passed one of her final exams, which means she is very close to becoming a senior physician now.  I have also now passed all of my exams and am a senior physician.  Interestingly enough, we both have startups as well.  I have an early stage health technology startup and my girlfriend has a non-profit startup which is launching a cancer screening programme in Africa.

So what’s the deal?  How come we are leading such fulfilling, exciting lives while a whole load of others out there want what we have, but never seem to quite get there?

(Just as an aside – I don’t think it’s because we’re particularly smart – I know loads of people who are smarter than us!)

I think that having “drive” and accomplishing things actually just comes down to organisation and prioritising what is really important to you. 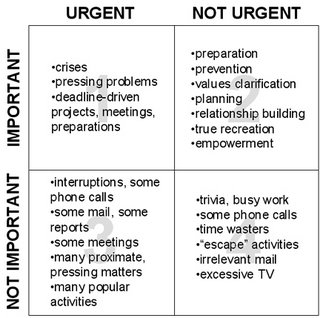 How do you spend your time?

If you look at the above chart (credit to Stephen Covey who created it!), it shows that there are four “quadrants” where people spend their time.

The fact is that most people spend most of their time in Quadrant III and Quadrant IV.  I’ve noticed that my girlfriend, myself and all the successful people we know spend as much time as possible in Quadrant II.

Working out, exercising, eating right, working on your dreams, dedicating yourself to an activity – these are the most important things you could do in life, yet most people choose to spend their time elsewhere.

Most people waste too much of their time on pointless activities such as watching TV or browsing FaceBook (Quadrant IV).

Most people fear things too much.  Therefore they dedicate a large amount of time to things which really aren’t important, but seem important (Quadrant III).

Quadrant III and Quadrant IV is where most people live life.

My girlfriend and I both passed our final exams by NOT going to study groups, by NOT wasting our weekends with other doctors preparing for their exams, I skipped my preparation courses for my final exams as I was meeting with important business leaders those evenings, I attended the minimum number of teaching sessions to pass my postgraduate training and so on.

In other words we didn’t let our fear of things which seemed important (but really weren’t) to get in the way of what’s actually important to us – our dreams and ambitions.

Of course this was a big gamble for me.  My exams cost £2,000 ($2,600) to sit.  If I failed one of my exams I think I would have had to take out a loan from the bank to sit the exam again as money was so tight when I launched my startup.

So that’s the hack!

I honestly believe that we’ve gotten as far as we have, not because we’re exceptionally smart or “driven”, but because we prioritise what’s important to us.  We know exactly what we want out of our lives and we execute the plan on a daily basis.  Most successful people do the same.  They define their Quadrant II, they identify with it so strongly that they grind and hustle until they’ve accomplished what they want to.  They don’t just wake up one day as incredibly “driven” people.  They just know what they want and go after it – everyday.

The main obstacle for others out there is not that they don’t have drive but silencing the part of their brain that makes them preoccupied with Quadrant III and Quadrant IV activities.  They are a waste of time and although most don’t realise it, these are the activities that eat away at dreams…day…by…day…